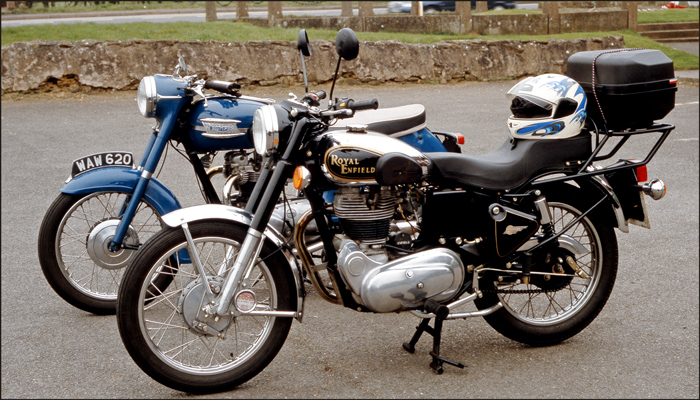 Legacy alone is not enough.

Motorcycle News is a magazine I love to hate, or hate to love anyway, but I still buy it every week, almost as a ritual rather than in the hope of being enlightened or entertained if only because they are always pushing something or repeating a formula that worked for a short while and then they forgot to fish around for some new cliches. However, there has been some improvement of late and you get the impression that the writers aren’t under the pressure they were and the fresh faces recentlybrought in do make it less predictable, which is  a good thing, but this isn’t about the paper itself but the dreams it sells.

There is not one issue allowed to be published which doesn’t hype up BMW and the all conquering GS in particular. For those not familiar with the BMW range the GS models are the chart toppers in the adventure bike category of motorcycle types, that is to say they have knobbly(ish) tyres and can be ridden on surfaces that  need not be tarmac. However, they are sold as machines that can take the adventurous anywhere in the world, the dream is of setting off over unknown terrain, exploring far lands, encountering gibberish tongues, stray beasts and funny food along the dusty way, The Land Rover was sold on the same promise until it got just too posh for the pretence to be maintained with a straight face but as yet BMW don’t appear to be fazed by such considerations although they can cost as much as a medium sized car. Naturally you’d expect such a rugged sort of go anywhere vehicle to be easily serviceable and mendable in the field, y’know, a local lad with a hammer and braising torch could knock it back into shape and get you going again but it appears that the dream only goes so far, for as MCN revealed recently it can take a dealer several hours to bleed the front brakes! Just to put that into context it is normally a job that ranks alongside changing the oil and adjusting the chain as essential mechanical skills for any rider carrying out their own basic maintenance and takes around five minutes on my Triumph.

I am not knocking BMW here, they make a good bike and are immensely popular, but I think it’s about time we took a step back and started to think again about why we buy a bike and just how suited it is to our needs, but more importantly, our aspirations. The GS is a classic example of how a buyer might harbour fond ambitions of great journeys that are never realised, likewise the various 180hp sports bikes flatter the rider with hints at their racing greatness but are totally impossible to ride in public at anywhere near their full potential. Both types are lifestyle statements as much as they are practical biking propositions and neither really fulfill their intended purpose. So which bikes do? A question that is most easily answered by looking at the other end of the scale. Cheap Chinese runabouts are just that, you know where you stand with them and nobody is fooling anyone about either their longevity or capabilities. Unfortunately they are usually sub 250cc and so if you are looking for brutal honesty then it tends to come with a lack of performance that will stall anyone with a serious interest in biking as an activity in addition to its role as  transport.

So there you have the two extremes. Glossy and expensive that are hardly practicable or cheap’n’cheerful which will leave you wanting more.  Thankfully the greater number of bikes on offer fall between these two stools and the choice is there to be made. There is little point in listing the makes and models as the newstands are full of magazines that will help you find some pattern in the jungle but there is a third side to the equation that is slowly emerging and that is the upgraded budget bike, by this I mean the those from the east which have been rendered more suitable for western tastes or made in far off countries but to European design and it is here that the tables are far more level. All the major manufacturers have plants abroad so the ‘Made in China/Brazil/India/Thailand’ label can hardly be considered the stigma that it was and yet few will boast of their products origins although it will not be denied when MCN coyly points to where they are produced. Brand, it appears, is everything and building that brand is not an easy task and relies on a lot more than legacy and fond memories of ancient days as John Bloor of Triumph understood and  one particular company is beginning to realise. The product has to be right as well and although boutique brands may find favour with the wealthy due to their exclusivity, such as the resurrected (in France) Brough, more everyday names such as Royal Enfield need practicality instead. Presently they haven’t got the engine power for developed countries but as a bike that will actually cope with monsoons and mystics, cows and collisions I’d put it way above the GS  any day, despite what Motorcycle News might say.