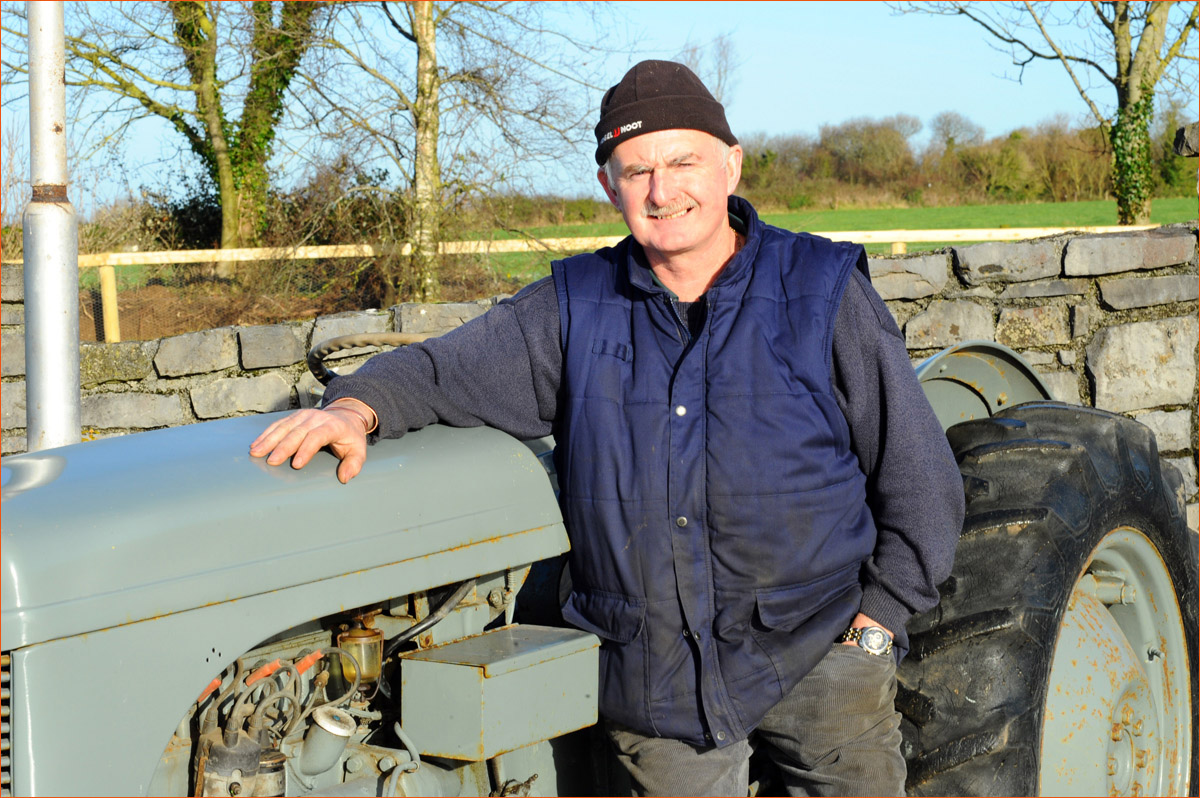 It all started with a call on the Wednesday night. Michael Fahey rang to say that having seen the distress of the flood victims on the TV in the wake of Storm Desmond he had decided to auction one of the tractors from his collection  in a bid to give them some comfort over Christmas, and could I help? Michael already does an incredible amount for charity  so there was no hesitation in volunteering, it was now just a matter of sorting out the details. This was on the 9th of December, 16 days before the deadline and so time was of the essence.

As soon as the word ‘auction’ is mentioned everybody thinks of Ebay, but they do like their 10% and we didn’t have the time to convince them that it was a charity sale and so not attract their usual commission. Another call was made, this time to Paul Cooke of Paul Cooke auctions in Naas, a young company, now just a year old, they have caused quite a ripple in their circle if only because they are some of the most genuine guys in the business. Would they help? The answer was yes, now what could they do for us? On Friday Michael delivered the Ferguson TE20 to their base where it was exhibited at the weekend plant sale to generate some interest, it being deemed too short notice to sell it there although it would have been the ideal occasion otherwise. Instead, the little grey fergie would go under the hammer at their commercial goods sale on the Thursday. Now, to get the word about.

We had the venue, we had the date but we hardly the time to spread the news! Rightly or wrongly it was decided to establish a website with all the details and try and push traffic towards it. By Thursday afternoon a basic site was online using photos taken that morning – www.tractorauction.eu and in the evening my daughter, Hazel, popped a Facebook page up as well. Another decision was that the money raised would be channeled to the affected areas via the Irish Red Cross and they set about contacting their list of media outlets throughout the country. This resulted in a couple of local radio interviews and some attention from a handful of provincial papers but the national press ignored the story.

Meanwhile, an advert was taken out on Donedeal and our own media contacts were alerted. Farm and Plant, The Farmers Journal and Irish Vintage Scene all had it on their websites within a day as did the Massey Ferguson club and their prompt response is truly appreciated. All the magazine websites carried a live link to the tractor auction website, this was not possible with Donedeal where the link would have to be copied and pasted rather than clicked upon by potential visitors to our site.

As the weekend drew to a close the Donedeal site had over 3,000 views while the FB page was running at about a third of that. I personally posted it on Linkedin as did Paul Cooke where it received a couple of likes and was probably seen by 1,000+.  It can’t be said how many people saw the item on the other portals but we know the numbers that came to the tractor auction site and the results make sober reading for those who think social media is the only way forward. Without going into too much detail the breakdown was roughly – 25% Facebook, 25% from magazine and club links and the rest from a direct address, which would be mainly Donedeal and, later,  from the Farmers Journal article published on the day of the sale. There were no hits from search engines (hardly surprising given the short time frame) and none at all from Linkedin either, and this pattern remained more or less unchanged until the auction day itself.

Let me be the first to point out that there are a million and one ifs and buts and one can’t read too much into the figures given the short space of time and small sample size. However, from our point of view paid advertising worked as did getting the news onto sites operated by the print media. Did social media make any difference to the final bid price of €2,200? We will never know, but that’s hardly the point for the sale was successful and some relief will be given to those who are living in misery this Christmas and that is what counts at the end of the day. Oh, one more thing,  unprompted, Donedeal kindly refunded the cost of the advert.

So to all those that helped, and I have a nagging feeling I have not done justice to everyone, a very big and heartfelt thank you from Michael and myself. We wish you all the very best this Christmas and a prosperous new year!