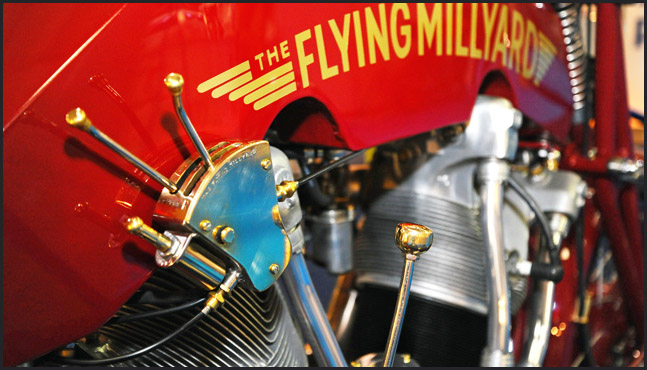 Like all premier bike shows the this year’s event in Dublin was full of all the latest machines laid out and lit up to tempt the punters with the pennies in their pockets. Yet wandering the various stands of the manufacturers one can’t but help feel that there is nothing really new or strange about the bikes on show. Sure, you’d struggle to buy a bad bike off a major manufacturer nowadays as all the new models are very competent machines, but there is almost an air of inevitability about them, they are designed to fit a niche, moulded to appeal to a segment, fashioned to suit a focus group, pretty baubles conceived by a team rather than betraying a flair and originality of an intrepid genius. But then occasionally there comes along a machine so far out of the box that you have to readjust your ideas of normality to even begin to understand what it’s all about, and this year visitors were privileged have such a bike to appreciate on the Carole Nash stand.

The Flying Millyard is one such creation, it  goes beyond much of today’s custom builds in that not only is the frame unique but so also is the engine. There is no taking a standard Harley V Twin, dressing it up chromium finery  and then arranging a novel pattern of tubes around it to which the wheels are attached, no sirree, this is the real deal, complete originality, and all done with a flair and skill that is rarely seen elsewhere. The two cylinders mounted in the heart of the machine are from a Pratt and Whitney R-1340 radial Wasp engine. This was the first motor the company ever built back in 1925 and there is a grace about their shape that suggests they are as much influenced by the then vibrant art deco movement as they were by engineering constraints. They are enthused with the optimism of the time when form and function were seen as inseparable allies in the joyful movement towards the freedom of travel which the new technology of flight promised, just so long as you could afford it that is. What better theme could there be to inform the design and execution of that other great expression of personal liberty that was exploding in popularity after the Great War, the motorcycle. 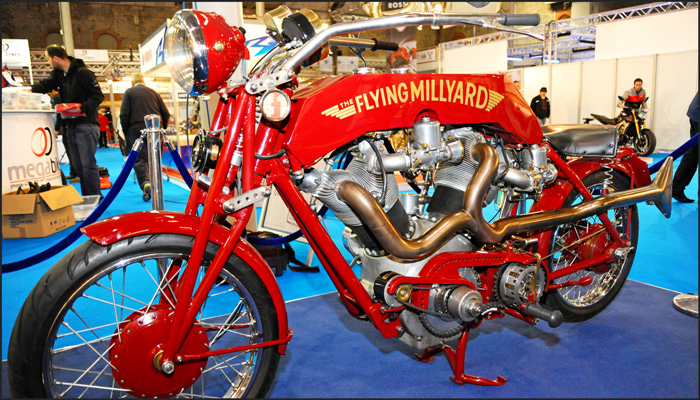 But how does one take these two great innovations that went on to shake the world up through mass transportation and personal independence, and bring them together in a work of art that so strongly reminds us of both, as well as  including an elegance and innocence that got shot away and left behind in the era of industrialised death and nuclear finality?  The two massive cylinders of 2,240cc each are a obviously a good start. Originally they would have been supercharged and offered around 60hp apiece, but the supercharging was more a necessity to compensate for the thinner air at altitude than it would be to provide endless amounts of grunt as we tend to assume down here at sea level. Despite their capacity they are each fed with only a two inch carburetor from a Jaguar and so provide an estimated 80hp between them, although the torque can only be wondered at! The pistons and rods inside are also courtesy of Messrs Pratt and Whitney but the crank is all handcrafted by the creator, Allen Millyard, and is pressed together from the webs and pins machined on his lathe and mill. Yet all this is merely a collection of parts without another piece designed and created with no previous model or reference to go by and this is the crankcase, the essential frame for carrying all the moving components and holding them true to one another. Like the crank itself this is unique, but unlike that item this can be seen and is a prominent visual feature of the machine, it then has to be aesthetically in tune with the theme as well as perform its duties and it does both quite admirably. Its shape belies its inner workings and the finish matches the overall experience of chrome and polish. The push rods tubes emerging from its topside create an impression of arms clutching the cylinders tight to the body of the beast while the exquisite sinews of the exhaust mimics the hunger of a twin headed lamprey drawing its sustenance from the ports and excreting the fumes though the fishiest of tails.  It is a thing of life and organic purpose that sets it apart from the chiseled competence of the contemporary motorcycles, it is a fluid thoroughbred conceived by the gifted individual rather than the sleek camel of various corporate departments, and all the more glorious for it.

Magnificent although the engine is, it is but part of the whole, a major part granted. The rhythm of the inter war years is continued throughout the frame and wheels. Girder suspension at the front is obviously de-rigueur, as is the hard tail although the seat is blessed with coil springs to alleviate the acuteness of the latter. Wheels of stainless steel spokes and a front brake borrowed from a Kawasaki come as part of the package, as does a control lever quadrant fashioned from a Villiers flywheel. Upon this is mounted one lever for ignition timing, another for the fuel mix and a button for turning the ignition on or off. Intervening between the engine and rear wheel is a four speed gearbox from a 1938 Morris that has been braced with MG TF racing gears.  At 2,000 rpm this will happily bring the bike to a 100mph top speed although 1800 revs and an 80mph cruising speed is much the preferable way to travel any distance. And Travel Allen does. Understandably it’s a summer bike for the roads of England when there no salt and a much reduced risk of inclement weather. He reports that it handles well and will zip though the lighter twists  with a poise that can keep it alongside more recent and sportier bikes. The wear to the edges of the skinny Avon tyres confirms that Allen has not forgotten that bikes are ridden for a purpose and that purpose is usually the joy of riding, so despite its apparent ungainliness it appears a perfectly usable bike, although the petrol consumption of between 5-20mpg does detract somewhat from its practicality.

The elevation of a mechanical fabrication to the pedestal of art  is a frequently encountered cliché in the motoring world, especially so by the chattering classes of middle England as they drool over various four wheeled exotica, but here the accolade is truly deserved. The fact that The Flying Millyard is such a success is no accident, Allen is a fully trained Machinist, apprenticed to the Ministry of Defence and a veteran builder of outllandish bikes that many have probably dreamed of but few have ever been able to make real, let alone in such an appealing and natural way. A trained engineer he may be yet he is also an artist, one that can weigh some material in his hand and imagine possibilities that are beyond the ken of the rest of us. It’s not just a skill, but a rare gift, and we are fortunate that he expresses his vision through the medium of proper motorcycles, machines that function and please with their work, rather than messy beds or pickled sheep.