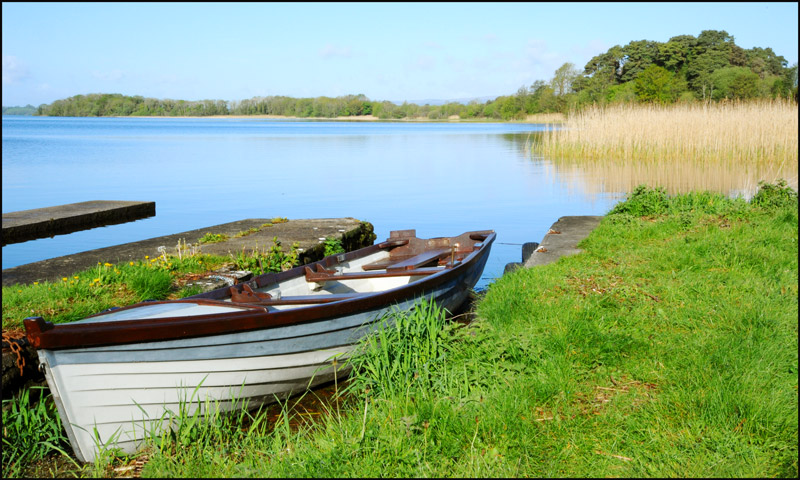 It was just over a year ago that I last found myself pausing by a Lough  on the way to an assignment, a moment agreeable enough to inspire a blog and much the same happened yesterday. I had set off in the midst of a drizzle, heading north towards Nenagh and on to a quiet byway that follows the shape, if not the shore, of lough Derg as it snakes a twisting path  back to Portumna. The Drizzle had cleared by Limerick and the sky was blue at Nenagh, the emerging leaves were that refreshingly light green of youth and all was well as I passed through  the countryside that hereabouts is more typical of the Welsh borders  than western Ireland. Possessing a few minutes to spare I once again let myself be seduced by a small sign indicating the presence of a lakeside pier about a mile down a lane of single width, and having arrived I met that peculiar quality of Irish Loughs, a tranquility that is palpable, a stillness that you feel.

Stillness is the absence of movement, something that we are tuned to detect, whether it be the flittering of movement at the edge of our vision or the pressure of wind upon our face. We have mechanisms for assaying our environment, so if such clues are removed how can we feel what it is replaces them? It is a conundrum that was answered in the act of its consideration as I stretched my legs along the waters edge.

The season of spring was busy catching up with itself and looking around the plants were bursting forth with freshness, a mallard quacked from across the water while two pigeons cooed somewhere off in the distance and that was pretty much the only contribution from the animal kingdom.  I had to look to find a scuttling spider and flies were mercifully still asleep, but the trees, the grass, the nettles, the docks the hedges and all that was green grew on.  Ireland is a land that belongs to the plants, it is a temperate rain forest. Mankind has borrowed much good land for cultivation but should he turn his back then wild nature will recover her assets within a season of him doing so. Down by the lough such things became clear, the air was still, the sun was bright, her energy being put to good use. As I  moved amongst it all an awareness of leaving a wake of minor turmoil behind slid into my conscious mind. I was an animal in plant utopia  and the disturbance I caused was out of place in a paradise dominated by photosynthesis rather than respiration. Respiration represents violence and turmoil, animal savagery and restless competition, not that the plant kingdom is by any means innocent of such traits, but it tends to be gentler world.

The turbulence left by mankind is never stronger than in our cities where we whip the natural serenity up into a froth of action and reaction, a vast collection of eddies and whirlpools that obscures and denies nature a role in how the world is run, but when we are gone the plants will still be there, they’ve seen it all before and the natural order of peace will be resumed, tranquility rendered whole once more, except for the occasions when nature herself feels obliged to rive it all asunder.