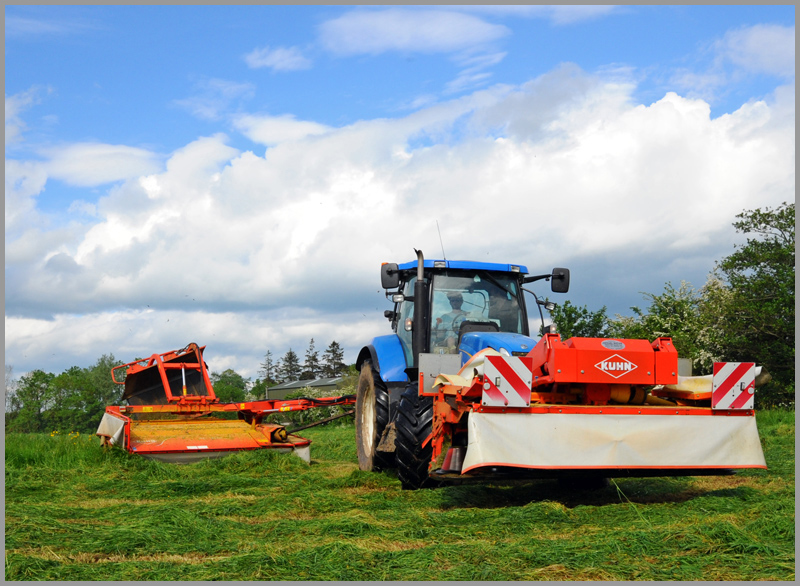 The start of the farmers harvest, yet almost a month must pass before the solstice.

May is a busy time for nature, perhaps her busiest month of all in Ireland for she accomplishes so much during these few weeks that mark the height of her productive powers. The trees eventually come in to full leaf, the hedgerows become corpulent with plenty, eggs are hatching and grubs collected but above all else the fields clog with a luxuriance of grass which, it must be admitted, is dependent to a great extent upon artificial sustenance yet it is impressive all the same.

Now, as we approach the end of that month, the first part of harvest is in full swing as the rich yield of grass is mowed and then taken to the clamp for ensilage. This is accomplished so swiftly nowadays that it appears almost magical, what would have taken at least a week when I was a student now barely extends beyond tea time on the day that the job started, the only hold up to further advances being the restriction of roads and gateways limiting the size of the machines that may be deployed. However, amongst the frenetic activity of the silage season there is often cause for sadness, and usually in my case, regret.

The regret is akin to the that which marks the passing of the years, it’s the realisation that one has not made as much of the time just passed as perhaps was possible although upon analysis it’s always difficult to point to where the effort could have been improved. The difficulty with May is that just so much happens in its 31 days that it is impossible to appreciate the activity and energy that falls upon the countryside as nature drives forward with her endless agenda of growth and reproduction. In this part of the world grass is the major crop, in the tillage lands the rape and barley will have flowered and been pollinated with seed set for collection in just a few short weeks time, the sun’s energy having being harnessed and directed to the provision of man. Yet, just a month from now it will all be over, the solstice will announce the passing of the expanding days and the foot will come off the accelerator as the verdant factory sits back from its task and gently eases itself into the quiet of summer.

There is always a day in late June when that switch finally occurs. It is not so pronounced here in the more equitable west of Ireland but it was certainly felt by those who cared to notice back over the water in Britain. There would come a morning when the air was different, the dew was not that of a cool night previous but carried a different scent, one of exhaustion rather than energy and I have spoken to those who know it for real and those who think I’m plain mad. Whenever I felt that day it became the moment my thoughts were of decline towards winter, the end of spring, and the summer was now upon us, it is the time to get on with any plans I have for the year has started to draw to a close. Certainly, all this can be as easily ascertained by just a glance at the calendar but one of the joys of rural life is that the 365 divisions it charts actually come to mean a little more than just a list of, personal, social and work related events that the less fortunate city dweller is left to ceaselessly observe.